Young people, schools and social action groups have been recognised for helping to change lives through sport at a charity’s special awards ceremony.

In recognition of young people and their teachers who have gone above and beyond this year to help their peers stay active, children’s charity the Youth Sport Trust (YST) has awarded a total of five YST Young Changemaker Awards and four Girls Active Awards as part of a virtual celebration.

“The Girls Active and YST Young Changemaker Awards offer a fantastic opportunity for young people to not only be recognised, but allow them to reflect upon, and celebrate the impact of their work over the last year.

“The awards are primarily about harnessing young people’s talents, voice and encouraging them to make a difference to others through sport. However, they also celebrate getting young people active and healthier through play and sport. Our research around barriers to participation in physical activity and sport tells us that one of the best ways to engage young people is through encouragement from their peers – something all these young people have done brilliantly.

“To date, the Awards have recognised hundreds of young people and some incredible achievements, both as positive peer influencers and participants. Well done to this year’s cohort.” 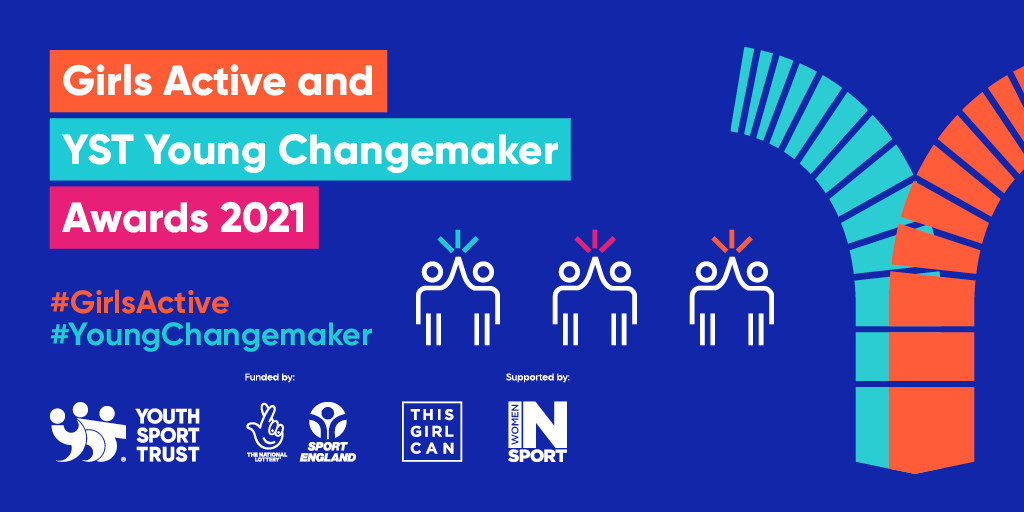 The full list of the 2021 award winners and their stories are below:

Character and Leadership Award - presented by rowing superstar and Chair of UK Sport, Katherine Grainger DBE: Winner - Zuleikha Chikh - The FA Asian Girls Insight Pilot Project. As a former YST Team Leader and a member of The FA’s Female National Advisory Group, Zuleikha offered her time to support an Asian Girls Insight Pilot in partnership with The FA. The aims of the pilot were to: better understand Asian girls’ perceptions and attitudes towards football and leadership in football; to understand why or why not this target group participate; and understand the barriers to participation. Zuleikha played a vital role in the facilitation of several focus groups, showing great confidence, care and wisdom in seeking the best from young people’s conversations. She was able to dig deep to gain valuable insight, which has been invaluable and will be used to create change for future girls' participation in football. Zuleikha also showed great leadership by sharing her leadership journey with the young people in attendance.

National School Sport Week Award - presented by Team GB swimmer, Alice Dearing: Winner - Woodthorpe Junior and Infant School in Birmingham. The school’s young leaders delivered a comprehensive programme of activities across YST’s annual awareness week. Pupils were given the platform to shape and develop activities to engage their peers in sport. They created opportunities for physical activity during every playtime as they worked towards a bronze/silver/gold accreditation endorsed by the area’s School Games Organiser. Other activities the pupils developed included Olympic themed assemblies, cricket, tennis and rugby taster sessions and a whole school golden mile challenge.

Physical and Mental Health Award – presented by Carl Konadu, co-founder of 2-3 degrees: Winner - ‘Boys Move: I AM Project’ led by Archbishop Beck Catholic College in Liverpool.  Boys Move is an approach developed by the Youth Sport Trust to use the power of sport to improve the mental health of young men in the UK. The young people involved were chosen not only for being part of a new ground-breaking project and being open about their own personal wellbeing challenges, but for taking responsibility for the change they want to create in their own lives and being brave to do something different to make that happen.

Inclusion Award - presented by Team GB pole vaulter Holly Bradshaw: Winner - ‘Supporting girls with autism' led by Alfriston School in Beaconsfield. A group of 10 pupils at the school have led the Youth Sport Trust’s programme development to support girls with autism who may be ‘flying under the radar’ and disengaged from school and their communities. The group has carefully created a light-hearted and unhurried atmosphere in PE lessons and extracurricular activities to ensure enjoyment and confidence in all young people. The young people involved have offered to lead transition workshops to support upcoming Year 6 girls to their school, acting as role models for those starting secondary school.

Personal Growth Award: Rhea Groves, Slated Row School in Milton Keynes. Rhea, who is in year 13 and has Downs Syndrome and a heart condition has spent a considerable period of time over the last 18 months shielding. To connect with her fellow students, Rhea organised a Downs Awareness week, recording daily videos featuring messages and workouts to do. Pupils aged 5 to 18 took part in the event. As well as helping to increase understanding, it helped Rhea to reconnect with her friends which made her transition back to school easier. She has also supported Youth Sport Trust’s ‘Move like me’ initiative to encourage other young people with special needs to be active. Rhea’s spirit and passion shone out to the judges, who were also impressed with the skills she has developed and how she has overcome her shyness and reticence to inspire other students.

Best Group/GLAMS Award: The Bourne Academy, GALS - Girls Active Leaders Squad in Bournemouth. The Girls Active Leaders Squad wanted to inspire and motivate their fellow students during lockdown. Creating a name, logo, ethos and PowerPoint presentation, video and rewards package, they pitched their idea to the school’s leadership team and then to the school. The judges were impressed with how the group worked together to raise awareness of the group and came up with incentives to encourage other girls to join their after-school club.

Innovative project award: Year 8 Girls Active Leaders, Kingsbury High School in London. Encouraging teenage girls to be active during lockdown was a challenge that the Kingsbury High School (KHS) Year 8 Girls Active leaders jumped at. The team created a video series of physical challenges with demonstrations and instructions, which was distributed to over 400 young people. The group also played a crucial role in supporting children transitioning from primary to high school by creating another video series for Year 6 students, answering questions about what life at KHS is like and supporting the Year 6 students to encourage Year 5 pupils to take part in the virtual physical challenges. The group’s enthusiasm and commitment to encouraging students to be active during a particularly challenging time and the care and support shown to younger students particularly stood out to the judges.

Resilient Leader Award: Skye Vurnum, Herne Bay High School in Kent. In spite of her shyness and health difficulties, 16-year-old Sky has continued to play a leading role at her school GLAMs group and developed a magazine, ‘Sweat Bands and Fake Tans’, to keep inspiring her peers to be active throughout lockdown. The judges were impressed with the resilience demonstrated by Sky in the face of significant challenges and how she has continued to lead by example.

The awards took place online on 24 November and saw shortlisted young people and their class bubble/year groups join virtually for the celebrations.

The charity would like to thank Sweaty Betty Foundation, Enrich Education, Limitless and Play Innovation for the donation of prizes. For more information on the Girls Active Awards and programme please visit www.youthsporttrust.org/girls-active-awards